“Fernando de Noronha” (a clumsy name for a spectacular speck on the map) was written by Ithaka, and published in Transworld Surf magazine [ USA ], Blue magazine [ Germany ], and Extreme Experts magazine [ Greece].

The heat had been brutally intense the entire week, the sun weighing down on us like a sumo-wrestler in a dry sauna, but within just a few minutes the sunny, nuclear blue, mid-afternoon sky transformed itself into a palette of varying tones of charcoal gray. Lightning and thunder erupted and the sky collapsed into a monumental celestial waterfall, the temperature dropping from an equatorial desert broil to an autumn chill in just seconds.

With it’s mammoth-sized raindrops, the storm’s commotion was absolutely ballistic, decibels seemingly in the triple digits. In its way, this was a kind of sonic salvation. This was only sound within the last seven days capable of extinguishing the ever present hornet-like drone of the island’s dune buggies. Buggies being the primary mode of transportation around the village and along the 5 miles of Noronha’s  single paved street (Highway 363) and 10 miles of rock and dirt roads.

At least 90% of the vehicles on Noronha (both rentals and of residents) are of the buggy variety, mostly painted in bright metallic colors. People take pride in their buggies, it’s definitely a kind of sub-culture among the islanders. The one our crew had rented for the duration (metal-flake blue) had trashed brakes and a burned clutch and was nearly impossible to drive, as are most of the rentals.

To escape the sudden temperature drop, hundreds of bullfrogs weighing at least a pound each, scrambled out of the bush and up onto the still-hot street asphalt to keep warm. And one-by-one most became road kill, popping like water balloons underneath buggy tires as residents, tourists and surfers headed back and forth across the island.

Just a hour and half after it had all began, the lightning, thunder and rain suddenly came to and end and once again mother sun dominated. We strapped our boards to the roll bar and were on our way. As we got down to the beach, we were ecstatic to see the swell had risen significantly. Now about six-eight foot faces, the visiting pros and locals alike were already back in the water and getting shacked off of their asses on every incoming set.

With prevailing sideshore-offshore winds along all of the surfable side of the island (churning out cylindrical funnels on even the most insignificant swells), it’s very likely that you will pull into some kind of barrel every time you paddle out here.

By the next scorching afternoon, just 22 hours after the deluge, there were few traces a storm of magnitude had even occurred. The browning plants didn’t appear any greener and the red clay mud had been returned to its hard dirt self. The only evidence the storm had taken place at all was the collection of squashed frogs strewn along the highway who had all been road-fried into crispy amphibian pancakes. As we passed a schoolyard on the way to the afternoon session, several junior-high students were engaged in an aggressive game of frisbee-tag, substituting the dried frogs for plastic discs.

Since its discovery by the Portuguese in the early 1500’s, Noronha has survived a yo-yoing of occupancies between the English, Dutch, French and finally back to the Portuguese. The island served as a penal colony during the mid-1700s which is unfortunately when the lush indigenous forest that once abounded on the island was completely scalped away, both to remove hiding places for convicts and take away potential raw building material for escape rafts (who in their right mind would want to escape from here anyway ?). This absence of trees radically altered the climate from tropical to semi-arid. But almost two-hundred years later, with the aid of various environmental groups, the forest is now beginning to make a comeback.

When Brazil became independent of Portugal in 1822, Fernando de Noronha was part of the package, lucky them. Even back in the day the Noronha archipelago (actually 20 micro islands and + the bigger one that people actually live and surf on) was considered a kind of oceanic jewel. Charles Darwin himself even visited in 1832 during research for one of his books.

During World War II, American military personnel were stationed hereand even today there are a handful of tin dome-roofed “quonset huts” still present around the island being used from everything from office space to pubs. Through the sixties, seventies and eighties, Noronha was a Brazilian Air Force base. And now the archipelago is in its most recent incarnation, that of eco-tourism dream locale and surfing destination.

Nearly completely absent in Noronha is the violent criminality that Brazil has become famous for, the most prevalent form of law enforcement here is conducted by IBAMA, the environmental agency responsible for protecting native plants and animals. One of their functions is making sure all surfers and swimmers on the island have exited the water and are off the beaches by 6pm to protect spawning green sea turtles, who are easily spooked and may not lay eggs at all if humans are present at night.

IBAMA agents are everywhere on the island, so read and follow the rules carefully. Taking shells for example is strictly prohibited. Even the removal or killing of a simple specimen like a crab can be up to a $5000 fine.

With 70% of the surrounding waters a designated marine park, fishing around Noronha is heavily regulated and for this reason, aquatic life is ridiculously abundant including; huge schools of spinner dolphins, groupers, eels, manta rays….and sharks.

Hang Loose, Brazil’s premiere surfwear line, has been environmentally proactive since its founding and specifically here on Noronha where they have sponsored their popular long-running Hang Loose Pro Contest  world tour qualifying event for eleven consecutive years. The contest is conducted in a minimalist format, the judging tower for example is half the size of a normal pro contest and built above ground so beaching turtles are not inhibited by the structure. Hang Loose is associated with both IBAMA and the environmental group TAMAR (who monitor Green Sea Turtle breeding, etc.) and is also a key sponsor of the island’s seedling nursery that is gradually reforesting the archipelago.

Noronha itself is extremely expensive. The flights are expensive. The rooms, the buggy rentals and food up to 4 times more expensive than mainland Brazil. Worse even that best months for surfing lie directly in the middle of the travel high-season of Christmas, New Year and Carnival. There is also an daily environmental tax, that gets increasingly more expensive, discouraging lengthy visits.

At any given time there are only 430 visitors allowed on the island (sometimes there is a waiting list), the local population is about 3000. That doesn’t sound like much, but being just six miles long and 2 miles wide there can even be traffic at times.

But even with the astronomical costs, why hasn’t this precious diamond in the tropical south Atlantic been completely overrun with wealthy, barrel hungry gringos and Brazilian mainlanders setting up shop like they do in Hawaii, Bali, Tahiti and the surfing world beyond?

Because in Noronha, immigration is not just frowned upon, it is absolutely prohibited, even for mainlander Brazilians. It is extremely unlikely that an island of this diminutive size could survive free access without being absolutely massacred by the masses.

If you dig crispy, maneuverable translucent beach break barrels in the 2-10 foot range, breaking over shallow white sand bars or wedging A-frames that jack up after bouncing off lava rock cliffs and zip down the line for 50 yards ending in ideal aerial launch sections -this may be a place you’ll want to check out.

CJ Hobgood a recent visitor and winner of Noronha’s Hang Loose Pro Contest said of the island “As far as fun goes…it does get any more fun”. 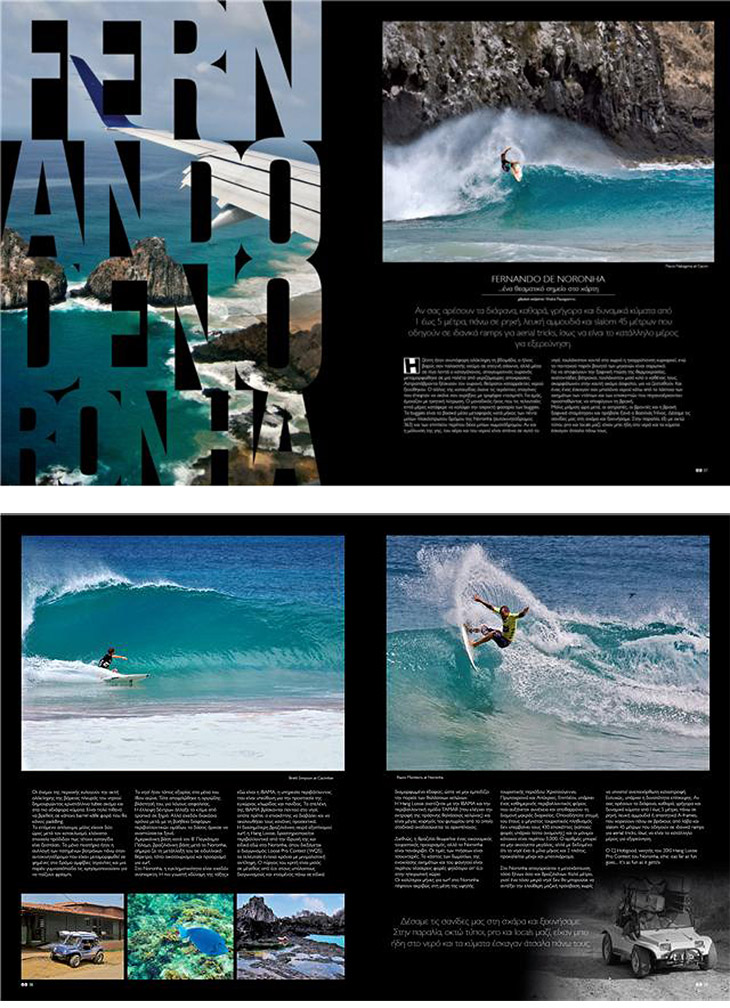